The Value of Experience

The Reason Behind Schooling
Next
Set of
Related
Ideas 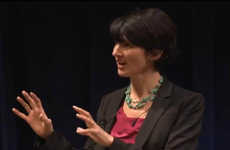 Zoe Chance's keynotes often relate in some way to her own personal experiences in life, and help her...

The Assistant Professor of Marketing at Yale University begins her keynote on making behavior addictive by relating a story about a time when she became addicted to using a pedometer. Wondering why this behavior became so addictive for her, and then later her sister, Chance would later be told by Tony Robbins, of the framework of the five human needs. The five human needs are: significance, certainty, variety, connection and growth. Provided that the behavior is able to meet three of the five needs in a meaningful way, it will become addictive.

The points made in Zoe Chance’s compulsive behavior speech can have tremendous implications in helping us to make any positive behavior we want, a compulsive one.
5
Score
Popularity
Activity
Freshness
Access Advisory Services