Making Your Own Opportunities

Living for the Moment

The Power of Persistence

Loving What You Do

Dreams Without Value
Next
Set of
Related
Ideas 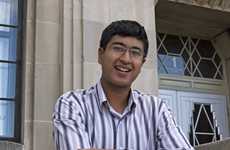 After a phone call from a doctor informing him that his father had a heart attack, Tyle finally accepted the fact that life is short and the worst thing one can do is waste the time they have been given. Deciding then and there that he would make his own road rather than simply do what other people do, Sujay began to chase his dreams.

Having an interest in chemicals at a young age, Sujay contacted company after company inquiring about the possibility of being able to work in a lab. Working in several labs on big projects since the age of 11, Sujay's success is the result of a relentless pursuit for opportunities and the refusal to take no for an answer. Ending his speech with a reference to Robert Frost's famous poem 'The Road Not Taken,' Sujay encourages that rather than taking the road less traveled by, be the creator of your own road.
4.9
Score
Popularity
Activity
Freshness
View Innovation Webinars