Trusting Your Own Process

The Myth of Meritocracy

The Importance of Curiosity
Next
Set of
Related
Ideas 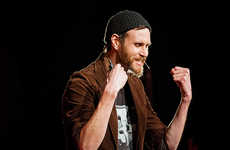 Brent Hiscock's speaking career began with him dropping out of community college. To date, Hiscock...

Vasiliki Marapas — November 5, 2013 — Keynote Trends
References: youtu.be
Share on Facebook Share on Twitter Share on LinkedIn Share on Pinterest
The Brent Hiscock experimental education speech begins with him dropping out of community college, and then later university. In fact, Hiscock is a five-time university drop out who decided he wanted to see how far his charisma and natural talent could take him occupationally, geographically and financially. Hiscock embarked on a series of odd jobs around the world, from oil rigging in Alberta to bartending in the Arctic Circle.

Hiscock did well for himself, at one point making over $100,000 and owning two homes. In spite of his financial prosperity, he developed a cocaine habit and a lying tendency and was one half of a toxic, unhealthy relationship. Hiscock had to reach rock bottom in order to realize 1) that talent doesn’t equal skill and 2) success might be more dangerous than failure.

Hiscock eventually returned home to continue his academic pursuits. He surmises that life is comprised of practical experimentation and application, encouraging his fellow students of life to trust and value in their process, whatever it may be.