Alternate Notions of Beauty
Next
Set of
Related
Ideas 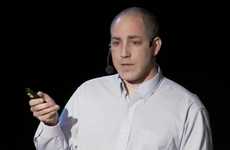 Colin Stokes' keynotes focus on media and specifically how film represents different people and what...

Jaime Neely — January 21, 2013 — Keynote Trends
References: colinstokes.blogspot & youtu.be
Share on Facebook Share on Twitter Share on LinkedIn Share on Pinterest
Colin Stokes, a director of communications for non-profit schools, delivers an insightful film lessons keynote, during which he addresses the messages movies send to children today. He compares the messages presented in The Wizard of Oz and Star Wars. He believes that The Wizard of Oz instills the right message for both young boys and girls.

The typical Hollywood plot awards a male character for defeating the villain with violence and the prize is usually a woman. Stokes wants to see a change in this. He uses Dorothy's character as an example of what other movies should be striving for in their own plots. Dorothy's character survives because she is kind, cooperative and generous.

Filmmakers need to start applying the Bechdel Test, which by asking three questions, reveals whether or not a movie is perpetuating gender stereotypes. A movie needs to have more than one female character with actual lines, a conversation between those women, and that conversation needs to be about something other than a male character.