Social Interactions With A.I.
Next
Set of
Related
Ideas 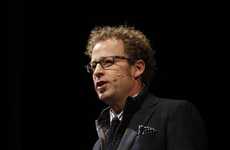 Keynote speeches by Ken Goldberg focus on the relationships that exist between humans and robots and...

Jaime Neely — May 28, 2012 — Keynote Trends
References: goldberg.berkeley.edu & youtu.be
Share on Facebook Share on Twitter Share on LinkedIn Share on Pinterest
This human behavior keynote speech from Ken Goldberg explores the potential of robots to inspire the world's populations to be better humans. Having studied robotics, computer science and engineering in university, Goldberg has a strong passion for the interaction between human and robots.

His speech reviews four different projects on which he has been working, each one offering an important takeaway for human behavior.

The first of these lessons is to constantly question assumptions. In doing so, individuals can push their boundaries in regards to their potential. The second lesson is that when in doubt, improvisation is one's best bet as it will enable adaptability. The third lesson, similar to the previous, is that when one's path is blocked, one should pivot. In doing so, all of one's efforts will not be lost. Lastly, Goldberg believes that if you want to do something well, there is no substitute for practice.
3.2
Score
Popularity
Activity
Freshness
Get Better and Faster