The Power of Memory

The Art of Epiphanies

The Power of Collaborative Thought

The Power of Pictures
Next
Set of
Related
Ideas 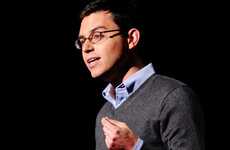 Joshua Foer's keynotes are a reflection on his experience as an author and freelance journalist. In...

Jaime Neely — May 12, 2012 — Keynote Trends
References: youtu.be
Share on Facebook Share on Twitter Share on LinkedIn Share on Pinterest
In this Joshua Foer keynote, he discusses the human brain and the extraordinary capabilities of one's memory. The science journalist kicks off his speech by talking about the United States Memory Championship that takes place every year, during which contestants memorize full poems, lists and patterns in minutes.

He explains how astonished he was with these people's accomplishments and how his astonishment quickly transformed into fascination. He decided to spend the next year of his career investigating his own memory and those of others.

He discovered that the contestants in these contests were using the same set of techniques invented and used by the Greeks 2,500 years ago; medieval scholars and politicians used these techniques to memorize books and speeches.

This technique, as Foer explains, involves taking information that is lacking context or significance and transforming it in some way so that it become meaningful in the light of of all the other things stored in one's mind.

Packed with eye-opening facts and fascinating anecdotes, this Joshua Foer keynote is as educational as it is entertaining.
6.7
Score
Popularity
Activity
Freshness
Jeremy Gutsche Keynote Speaker

Expert Opinion vs. Instinct
Noreena Hertz Discusses When One Should and Shouldn't Trust Experts
play_circle_filled