The Story of Success

The Importance of Urgency

Leading Without a Title

Putting Your Strenghts To Work

Playing the Odds to Win Big
Next
Set of
Related
Ideas 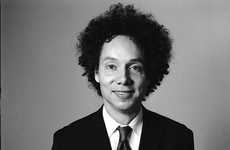 Keynotes by Malcolm Gladwell are as complex and inquisitive as his famous non-fiction written works....

Malcolm Gladwell Argues That Human Potential is Being Squandered

Rebecca Byers — February 22, 2012 — Keynote Trends
References: gladwell & youtu.be
Share on Facebook Share on Twitter Share on LinkedIn Share on Pinterest
Bestselling author Malcolm Gladwell discusses some of the main points from his most recent book 'The Outliers: The Story of Success,' which focuses on why it is that certain people are massively successful while others fall to the wayside. Gladwell's interesting evidence suggests that whether we know it or not, we are enabling part of the population to succeed due to several accepted notions about talent, like that some people have superior, innate abilities.

Malcolm Gladwell explores three conditions that he says constrain capitalization or limit the exploitation of human potential in America: poverty, stupidity, and culture. For stupidity, Gladwell explores the effect of hockey age cut-offs on the success of young hockey players. Since the cut-off is January 1, the largest children tend to get picked to play hockey at a higher level, which allows them more practice time, games, and one-on-one coaching, making them better in the long run, when in the beginning they were really just bigger than the boys born in the second half of the year.
6.3
Score
Popularity
Activity
Freshness
Access Advisory Services