Fulfillment in the Workplace

Pursuing Passions as Careers
Next
Set of
Related
Ideas 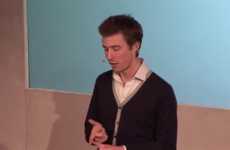 The Rob Symington talk on fear of failure and pursuing meaningful careers mentions his own personal...

Alyson Wyers — September 29, 2013 — Keynote Trends
References: escapethecity.org & youtu.be
Share on Facebook Share on Twitter Share on LinkedIn Share on Pinterest
In his meaningful career talk, Rob Symington discusses the fear of failure and the boredom and confusion many young professionals face when entering the work force. Symington, like many others, found himself in the corporate world as a junior management consultant by accident. This natural progression led to a demotivation and boredom, which eventually led to him co-founding Escape the City, which connects professionals with non-corporate opportunities.

He draws from his personal experiences and emotional breakdown in his meaningful career talk to illustrate the paralyzing effects the fear of failure can have. He outlines three core principles to show why many feel this way in similar situations. Humans crave security, are wired to see threats everywhere and practice experiential avoidance (or procrastination). He advises the audience not to fear the unknown or failure, to embrace certainty, to fear boredom and regret and then act on it.
4.3
Score
Popularity
Activity
Freshness
Get Trend Hunter Dashboard