One on One Evolution 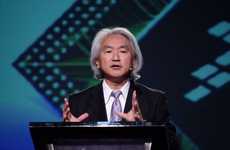 The speeches by Michio Kaku discuss the future of human evolution, and cover some of the most...

In This Michio Kaku Speech, the Physicist Talks of the Impending Energy Crisis

Rebecca Byers — April 27, 2012 — Keynote Trends
References: youtu.be
Share on Facebook Share on Twitter Share on LinkedIn Share on Pinterest
In this Michio Kaku speech, the American theoretical physicist and co-founder of string field theory discusses the limitations around solar power as a main source of energy and the current problems involving the global dependency on fossil fuels. While many in the field of energy feel the time is right to make a societal shift to solar power, Kaku points out the weak links in the solar energy process that suggest it may not be the right time, such as low efficiency and a need for long-term storage capabilities.

Touching upon Hubbert’s peak theory, which states that the rate of petroleum production follows a bell-shaped curve, Kaku asserts that, although we will never entirely run out of oil, the world would need to discover a new Saudi Arabia every five years to fulfill its current needs. Kaku concludes by stating that although there is a lot to work out technically, he believes that solar will eventually be the solution to the greenhouse problem.
5.5
Score
Popularity
Activity
Freshness
Get the 2021 Trend Report FREE