The Economic Power of Women

Progression of Civilization
Next
Set of
Related
Ideas 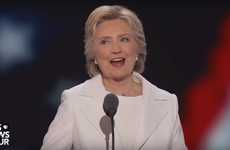 Hillary Clinton's keynotes reflect on her experience in American and international politics as well...

Alyson Wyers — July 31, 2016 — Keynote Trends
References: youtu.be
Share on Facebook Share on Twitter Share on LinkedIn Share on Pinterest
In her historic nomination speech, Hillary Clinton accepts the Democratic nomination for the American presidency. The first female candidate for the President of the United States, the former Secretary of State and First Lady discusses her passion for public service and the lessons her mother passed down to her.

Firmly aligned with her former rival, current President Barack Obama, the speaker echoes his sentiments of voting and taking action rather than booing. She also criticizes her political opponent, Republican nominee Donald Trump stating he was unfit to lead the country based on his behavior throughout the campaign thus far, saying "A man you can bait with a tweet is not a man we can trust with nuclear weapons."

The powerful nomination speech also spoke to women's empowerment and left an optimistic message: "After all, when there are no ceilings, the sky’s the limit."
2.5
Score
Popularity
Activity
Freshness
View Innovation Webinars