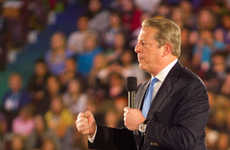 Al Gore's keynote are heavily influenced by his commitment to battling climat change. Best known as...

Al Gore Motivates Teenagers in This Saving the Environment Talk

Alyson Wyers — September 8, 2013 — Keynote Trends
References: algore & youtu.be
Share on Facebook Share on Twitter Share on LinkedIn Share on Pinterest
In this saving the environment talk, former US Vice President Al Gore speaks passionately to an audience of committed youth. The speech occurred at We Day, Free the Children's signature youth empowerment event where tickets can't be bought, but are earned through taking one local and one global action. Gore honors these young world changers, and touches on his favorite cause -- the environment.

In the 2012-2013 school year, Free the Children undertook a year long initiative to provide access to clean water in developing countries. Gore discussed the water cycle and how global warming is having a negative effect on the natural cycles many ecosystems depend on. The result of this is drought, floods and extreme weather conditions.

The most impactful portion of the saving the environment talk was when Al Gore painted a picture of our children and grandchildren's lives. When those who inherit the results of our current decisions see even more negative effects of climate change where resources are scarce and it's too late to turn back, they will ask why we didn't do something to stop it at the beginning of the 21st century. Or if they inherit an earth thriving with energy efficient technologies, solar power and millions of new jobs, they will ask how we rose up to do what was necessary. Gore says we have the tools and the technology, but we need to will to act, which luckily is a renewable resource.
6.5
Score
Popularity
Activity
Freshness
Attend Future Festival