The Evolution of Music

The History of Social Media

The Future of Medicine 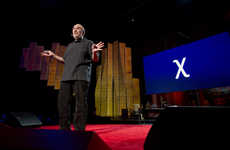 The Terry Moore presentations are humorous discussions that examine how to master even the most...

As it turns out, the letter x is used to represent unknowns in more areas than mathematics. We denote x to symbolize virtually any unknown: X-Files, the XPrize, Project X, etc. Terry Moore reveals that the history of the letter x representing the unknown has its roots in the Arabic language. The Arabic texts containing important mathematical knowledge, such as Algebra, made their way to Europe where they were readily translated. Due to linguistic difficulties, scholars were forced to borrow different letters from the Greek alphabet in order to transcribe the sound. When the text was transcribed again into Latin, the same Greek Letter would be changed to its closest relative, the Latin letter x.

Though Terry Moore's solve for x speech isn't very long, it is no less informative and illustrates how historical circumstances affect us to this very day.
5.6
Score
Popularity
Activity
Freshness
Attend Future Festival