Earth's Role in the Universe 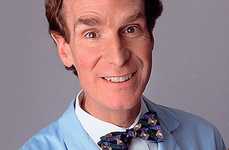 Bill Nye's keynotes reflect a profound understanding of science that he has been able to translate...

A moon of Jupiter, Europa was formerly considered to be an ill-advised, expensive mission that would require drilling through 50km of ice to reach the seawater beneath (that's kept liquid thanks to Europa's 85-hour orbital period with Jupiter). However, with its icy crust and gravitational orbit, Europa propels fountains of water into space. Nye explains that instead of the aforementioned expensive drilling technique, "you would build a much more modest spacecraft that would have to go the extraordinary distance out to Jupiter and get an orbit out there around Europa, but, you would have it fly through the geysers [...And it would be] like looking at bugs on the windshield."

The mission, if it were to be conceived, would cost $2 billion dollars over the course of ten years, a figure which Nye likens to "barely the cup of coffee per taxpayer once." Not a bad price to pay for a collective scientific discovery ofn life outside of Earth, no?
2.1
Score
Popularity
Activity
Freshness
Get Better and Faster