Mental Illness as Artistic Ability
Next
Set of
Related
Ideas 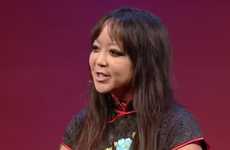 Famously known for the creation of the Before I Die wall, Candy Chang's keynotes reflect on the...

After the sudden loss of a loved one in 2009, Chang was overtaken by thoughts of death. She struggled to stay positive but when it became increasingly difficult for her to maintain perspective on the meaningful things in her life, she decided to transform a nearby abandoned building into a giant chalkboard with the incomplete sentence, “Before I die, I want to…” Chalk was left for passersby to fill in and by morning, the wall was plastered with hopes and dreams by fellow neighbors and strangers.

The busy board brought comfort to its creator. Knowing that she was not alone, the board helped Chang realize what perspective death enabled her to gain. The wall, which was originally designed for people to reflect on life quickly evolved into one of the most creative inspirational campaigns. Beginning in New Orleans, USA, the Before I Die wall immediately reached other countries including South Africa, Argentina and Canada. “Preparing for death,” she concludes, “is one of the most empowering things you can do. Thinking about death clarifies your life.”
3.8
Score
Popularity
Activity
Freshness
Jeremy Gutsche Keynote Speaker