From the Obstacle Comes the Path - Kevin Pearce - Do Lectures 2015 from The Do Lectures on Vimeo. 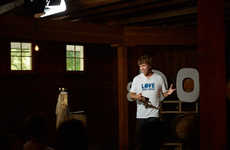 Ady Floyd — March 28, 2016 — Keynote Trends
References: vimeo
Share on Facebook Share on Twitter Share on LinkedIn Share on Pinterest
During this talk on perseverance, Kevin Pearce shares his touching story about overcoming physical injuries in order to create a happier outlook on life. Pearce's exhilarating, but short-lived athletic career as a snowboarder was extinguished after too many life-threatening falls. Instead of pursuing this career and risking serious brain trauma, Pearce changed his destiny.

After his final fall -- and numerous concussions, Pearce’s talk explains how he changed his life and devoted himself to a healthier lifestyle. As a result of his brain injuries, Pearce started a social profit organization called ‘LoveYourBrain.’ His organization supports those suffering from traumatic brain injuries, while simultaneously providing support for their families as well.

During his talk on perseverance, Pearce uses his inspiring anecdote to show people that following one dream might lead to something completely different. While his story is heartbreaking, his optimism and courage is proof that overcoming physical trauma is highly plausible.
4.2
Score
Popularity
Activity
Freshness
Attend Future Festival