The Evolution of Web Storytelling

The Internet's Effect on Lying

The Evolution of Storytelling

Creating the World You Want
Next
Set of
Related
Ideas 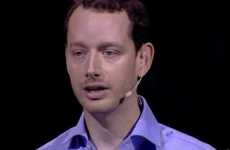 Ryan Merkley's presentations include various innovations from the Mozilla Foundation where he is the...

Despite the upgrades and advancements of Internet browsers and platforms, the COO points out that little has been done to videos, which have been neglected for over a decade with its only improvement being resolution and window size. In his live demo, Merkley shows audiences how web events can be pulled into the video so that viewers won’t have to pause and open another window to search for certain related topics. Using the Popcorn Maker, a web-based video editing tool designed by Mozilla Firefox, allows users to embed related links and events such as blog articles and Google Maps into the video. The tool also lets editors manipulate the image to zoom into and out those events.

With an average of 60 videos uploaded per day and over four billion daily views on YouTube alone, it’s important that storytelling methods are manipulable to match the filmmakers’ identity, something that Popcorn Maker’s interactive program hopes to achieve.
2.7
Score
Popularity
Activity
Freshness
Attend Future Festival