Exporting a Culture
Next
Set of
Related
Ideas 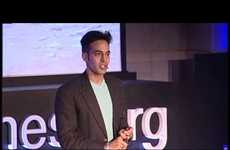 The Ravi Chhatpar speeches on innovation in Africa come from his personal experience in northern...

Alyson Wyers — September 19, 2013 — Keynote Trends
References: frogdesign & youtu.be
Share on Facebook Share on Twitter Share on LinkedIn Share on Pinterest
In his African innovation talk, Ravi Chhatpar offers several insights that are relevant to innovation in the Western world as well. To illustrate the importance of storytelling and authenticity, Chhatpar speaks of his personal experience encountering savings and loans associations (SLAs) in northern Rwanda. There, he met a woman who invented a financial instrument for the purpose of purchasing a functional and symbolic object. This not only helped the community in tangible and intangible ways, but was also a means to make money that regular banks would not be able to compete with.

Four keys Chhatpar points out in his African innovation talk are authenticity, suggestiveness, the unexpected and privilege. He notes that more doors opened for him on the ground when he worked with a local team and lived as they did, instead of sleeping at hotels and eating in restaurants. Cultural immersion, a 'willingness to hustle' and an ability to see the story under the story are all considered innovation tactics as well.
4.3
Score
Popularity
Activity
Freshness
Access Advisory Services