Markets Sustained by Cyborgs
Next
Set of
Related
Ideas 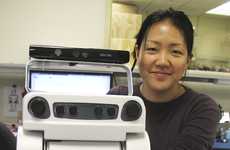 Leila Takayama's speeches display her open-minded thought process through robotic creations. As a...

In an attempt to make robots more like humans, Leila Takayama, along with Willow Garage, a company that specializes in developing personal robots with a human touch, collaborated in the creation of Personal Robot 2. Regardless of whether it's a machine or a robot, many people are already using these devices to carry out daily tasks, but the question remains on how to make it more mobile and approachable. Inspired by the Mini Cooper's design, Takayama and her team modeled the cameras, or eyes, after the vehicle's headlights and effectively removed all the unnecessary bulkiness from the automaton. With the assistance of Pixar's Doug Dooley, who "breath[ed] life" into the robot, humanistic features were included such as gestures of forethought, pondering and disappointment were included to signify the cyborg's attempt at a task.

An abundance of robots is inevitable in the rapidly changing digital world. Takayama encourages programmers and designers to develop automatons and algorithms that can interact in human environments more effectively, allowing it to connect on a closer level with its users.
2.5
Score
Popularity
Activity
Freshness
Get Trend Hunter Dashboard