Where Creativity Comes From

Connecting Through Letters
Next
Set of
Related
Ideas 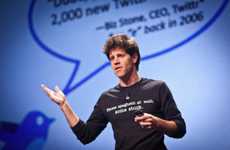 Inspired by Ernest Hemingway's challenge to tell a story in six words, founder and efitor of SMITH...

Inspired by a bar bet with Ernest Hemingway where he was challenged to write a story in six words, the Six Word Memoir began as a contest and quickly evolved into a method where people of all ages form around the world participated to tell their side of the story. Everyone has a story to tell, Smith said, and they have to be reminded that they are being heard. As the project exploded on Twitter, SMITH Magazine and the Six Word Memoir gained more media attention and bean partnering with businesses and organizations like the U.S. Constitution Center, the Veteran’s Association and To Write with Love on Her Arms, to name a few.

In what Smith calls the chicken’s eye perspective where people are constantly pecking away at the world trying to make sense of it, the project encourages people to voice their concerns in a small handful or words in order to help them reflect on what their story is, helping them making sense of it all.