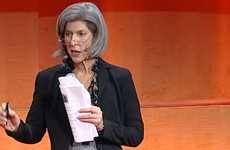 The keynotes by Lauren Zalaznick focus on television and share how the television has become a...

Jana Pijak — January 7, 2012 — Keynote Trends
References: nytimes & youtu.be
Share on Facebook Share on Twitter Share on LinkedIn Share on Pinterest
TV executive Lauren Zalaznick reflects on the concept of television. Zalaznick states that the average American watches at least 5 hours of television a day. People call TV stupid, but she believes that television has a conscience. Television directly reflects moral, social, political and emotional need states of our nations and is how we disseminate our entire value system.

The speaker talks about popular TV over the last 50 years discussing themes, ratings and viewer reactions. Much like humans, television has evolved over the years, exploring a variety of themes including inspiration, moral ambiguity, comfort, social commentary and irreverence among others. A comparison of television themes and ratings reflects political, social and moral situations.

In this informative keynote, Lauren Zalaznick proves that television reflects intelligence and that viewers give it life and longevity.
2.8
Score
Popularity
Activity
Freshness
Get Better and Faster