The Gray Areas Between Sexual Preferences 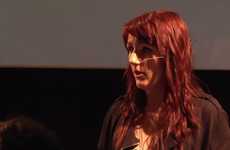 The lectures by Katie Cattermole center around her studies at LSBU. Cattermole is currently in her...

Vasiliki Marapas — May 1, 2014 — Keynote Trends
References: youtube
Share on Facebook Share on Twitter Share on LinkedIn Share on Pinterest
Katie Cattermole deconstructs harmful stereotypes in her lesbian portrayal speech by considering the hyper-sexualization of lesbians in pornography in relation to what she calls the "hierarchy of patriarchy." The hierarchy is a measure of how your characteristics define how you're treated in society. Cattermole's hierarchy is as follows: heterosexual men, heterosexual women, gay men and herself. As a woman and a lesbian, Cattermole occupies a rank of double oppression that the preceding groups do not.