Storytelling in the Digital Age

Gender and Workplace Conversation
Next
Set of
Related
Ideas 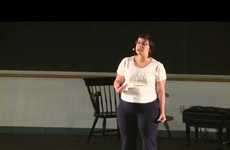 Nicole Lucia's speaking career focuses around her vested interest and involvement in the Queer...

While straight couples are afforded a wide range of media representation, there is a scarcity of ##### portrayals out there, and what is available is incredibly limited. For instance, Lucia mentions two TV series of the past decade that heavily relied on what she refers to as the “promiscuous lesbian trope.” Both The L Word’s Shane and Lip Service’s Frankie are “eternally single and emotionally distant” characters who engage in perpetual promiscuity with complete disregard for their partners. Rather than identifying this behavior as abusive and misogynistic, it is often dismissed by their friends.

Representation in ##### literature is equally as one-dimensional, with narratives that are often confined to a secret love story that builds to a climax of rejection. Lucia argues that the prevalence of these narratives sustain feelings of isolation and shame. In turn, this causes an alienation from social institutions and a stripping of personal agency, both of which contribute to the cyclical nature of abuse.

In terms of a solution, Lucia calls for more accurate, varied forms of representation and a critical eye. Dealing with the aftermath is insufficient; we must make prevention a priority.