The Nature of Choice

The Future of China

A New Way of Cooking
Next
Set of
Related
Ideas 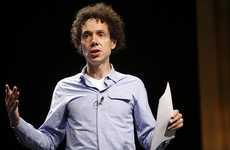 Keynotes by Malcolm Gladwell are as complex and inquisitive as his famous non-fiction written works....

Rebecca Byers — February 7, 2012 — Keynote Trends
References: gladwell & youtu.be
Share on Facebook Share on Twitter Share on LinkedIn Share on Pinterest
Author Malcolm Gladwell discusses the nature of choice and an important shift in the food industry's pursuit of how to make customers happy. Previously, Malcolm Gladwell explains, the food industry would flatly ask Americans exactly what it was they wanted, for example, out of a spaghetti sauce. The problem with this, according to the author, is that customers don't know what they want.

Malcolm Gladwell discusses the work of Howard Moskowitz, a food scientist, who completely democratized how we think about taste with his revolutionary view of spaghetti sauce as being on a horizontal plane, rather than a hierarchy of best to worst. The "platonic notion of what tomato sauce was" was completely challenged when Moskowitz organized data he gained by traveling across America testing out 45 varieties of spaghetti sauce in every possible variety by grouping them into clusters instead of looking for a number one.

By seeking a variety of options that customers wanted but had not yet been exposed to and steering away from the idea of one "best" spaghetti sauce, Malcolm Gladwell explains how Moskowitz's unique perspective opened up countless opportunities for growth.
6.1
Score
Popularity
Activity
Freshness
Jeremy Gutsche Keynote Speaker