How to Measure Drive 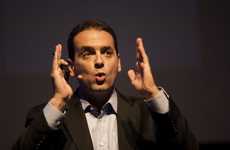 Daniel Pink's keynote career has been largely based off his time spent between 1995 to 1997 as Vice...

The old attitude of "Always Be Closing" has evolved, and the new ABCs of selling are "Attunement," "Buoyancy" and "Clarity." Attunement is understanding someone else's perspective. Power inhibits attunement, and if you are in a position of power, it is incumbent upon you to see yourself in the lower position of power; this will help you to view things from their perspective. Buoyancy is to prepare yourself for an encounter. Rather than telling yourself you can do something, you should instead ask yourself if you can do it. Questioning yourself forces a response, which is much more powerful than an affirmation. Lastly, clarity is making sense of the abundant amount of data that is out there, but more than that, clarity is finding and anticipating problems.

Daniel Pink's sales keynote applies to everyone, as he argues we are all salespeople of one kind or another now. Making his new ABC's of selling a valuable tool for all.
1.2
Score
Popularity
Activity
Freshness
Jeremy Gutsche Keynote Speaker