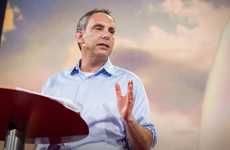 The Dave Isay talk about story shares the power of an interview and holds that every person has a...

Alyson Wyers — March 31, 2015 — Keynote Trends
References: storycorps.org & youtu.be
Share on Facebook Share on Twitter Share on LinkedIn Share on Pinterest
In a powerful talk about story, Dave Islay talks about the profound impact an interview can have. The Founder of StoryCorps explains the microphone means a lot to people, especially those who were told their stories did not matter.

StoryCorps hopes to turn documentary work on its head. Instead of the interview being a tool for art, education or entertainment, it is positioned as the main goal. A booth at Grand Central Station in New York City was set up where anyone could go in and interview someone about their life. Parents and children and even strangers spoke as if it was their last conversation. At the end, the pair would get one copy of the interview while another was archived at the Library of Congress. The talk about story and humanity shows the nature of people is basically good, and the interview often served to showcase incredible traits like authenticity, forgiveness and love.

Next, Isay hopes to take StoryCorps to the national level to help record personal histories of ordinary and unheard people everywhere in an effort to demonstrate "the simple truth that every life matters equally and infinitely."
0.7
Score
Popularity
Activity
Freshness
Get the 2023 Trend Report FREE