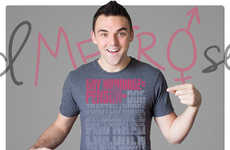 Vasiliki Marapas — October 29, 2013 — Keynote Trends
References: youtu.be
Share on Facebook Share on Twitter Share on LinkedIn Share on Pinterest
In Sam Killerman’s gender complexity speech, he looks towards a society that is more “gender creative.” Essentially, what he means by this term is an environment in which people will not suffer negative social consequences for questioning their gender identity and expression. In fact, questioning your gender construction will be encouraged and supported.

He clarifies that gender and sexuality are related, but are separate entities that do not necessarily dictate one another. He goes onto differentiate biological sex, gender identity and gender expression. While physical sex can exist in a uniform and predictable manner, gender expression is relative and cultural. Gender identity refers to how an individual internally conceives themselves to be, while gender expression is how you perform or present your gender through your demeanor and dress. These two concepts do not necessarily align with each other, or with the biological sex.

Killerman asserts that the gender binary is too narrow to encapsulate all individual identities. He urges us to not merely accept this binate, instead advocating for the unlearning of gender.